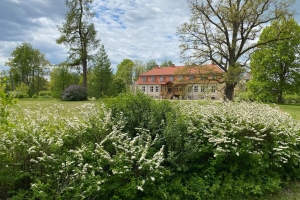 From 1989 the manor was owned by the graduates of Riga School of Applied Arts (now RDMK), woodcarvers Karlis Zemitis and Janis Cirulis.

After the fire (in 2000), which completely destroyed the roof of the Master House there was discovered a part of previously unknown paintings. The wall paintings of Oleri manor is a remarkable specimen of classicism painting, which has been granted the status of National Art Monument.

Applying the traditional building techniques and materials, in the building there takes place successful renovation.

Since 2005 there has been operating the association "Oleri Manor", which arranges both building reconstruction already throughout entire Vidzeme, renowned chamber music concerts.

In 2008, there was launched the park improvement work. There was created a historic vegetable garden (potager). Along the tracks there were placed benches.

In the historical site there is a built in 2010 gazebo, following the sample of a drawing from the book "Die Bau- und Kunstzimmerei: mit der Besonderer Berücksichtigung äusseren Form. hrsg. von und Franz Sales Meyer" published in 1896.

Crossing the romantic oak bridge, you find yourself on approximately 2 km long walking trail along the forest neighbouring the manor complex. From one of the trail sections there is visible the former Oleri Lake (now a bog). The trail is still being under construction – please wear shoes meeting the seasonal requirements.

There has been restored the former mansion barn, which houses a furniture joinery workshop.